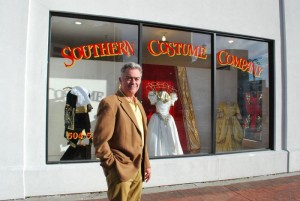 For over 25-years, costume supervisor/designer Wingate Jones has followed in the tradition of his father, John Golden – former president of Western Costume Company in Los Angeles, California. As owner of Southern Costume Company, Wingate has managed to create a true Hollywood-style costuming department in the Central Business District (CBD) of New Orleans.

As a child, no one was quite sure what would become of Wingate, such were his ways. At the age of fifteen, he took his first summer job at his father’s place of employ, Western Costume Company in Los Angeles, California where he learned the fine art of dusting boxes. In his freshman year of college, and for several subsequent summers, Wingate studied the arts in Florence, Italy prior to joining the United States Marine Corps. In 1980, Wingate secured a position in the Wardrobe Department at Universal Studios where he continued to work for a number of years as a costumer on such shows like, “Magnum, P.I.”, “BJ & the Bear”, “Simon & Simon”. It was this experience that led to work on many feature films and television projects over the course of the next twenty years including, “Top Gun”, “Ferris Buellers Day Off” and many more. Wingate moved to New Orleans in 1997, retired from the film industry in 2000, retrained as an IT Guy and worked for ten years in a corporate environment always harboring a desire to bring the artistry and expertise of the Los Angeles costume world to the south. In 2010 and after careful planning, Wingate’s concept was realized through the opening of Southern Costume Company – the only “Hollywood Style” costume house in Louisiana.

As the largest costume shop in the South, we are a krewe’s premier resource for all their Mardi Gras needs.
Learn More