SCC opened in 2011 and has been providing costuming and wardrobe assistance on local productions, such as 21 Jump Street, Memphis Beat, Treme, and many more. Located in the New Orleans Central Business District (CBD), this Hollywood-style costume shop provides top-of-the-line costume rentals that have been used in television movies and Oscar award-winning films, giving the public a chance to be costumed just like the stars. Do you dream of being a star? Seeing your name in lights? At Southern Costume Company, being a star is well within your reach. In addition to our extensive costume list, we also have costumes available from the following films and television shows for rent to the public: 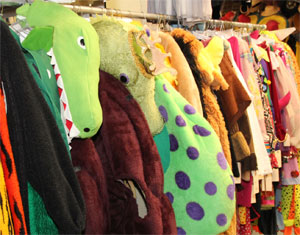 Want to feel like a star and are looking for an amazing selection of costume rentals?

New Orleans Southern Costume Company has everything you need. Contact us today to find out more information about our affordable rentals.

As the largest costume shop in the South, we are a krewe’s premier resource for all their Mardi Gras needs.
Learn More